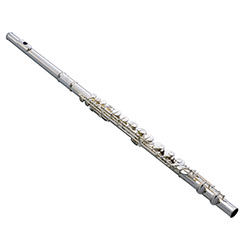 Flute
Long, long ago, the flute already existed; it was made out of a hollow piece of bone, bamboo, wood or ivory with a few holes in it. The flute was not used to play concerts – the shrill sound was used to chase away enemies or angry spirits, and to send signals to one another. Modern flutes have 16 holes and, thanks to the clever key system, it is psossible, with just 10 fingers, to close all 16 holes. This system was invented by Theobald Boehm in 1832. As the instrument developed further, the materials used were also improved upon – modern flutes are silver-plated, solid silver, and, if you’re very, very wealthy, even made of gold!

The modern metal flutes still belong to the woodwind family, because they were formerly made of wood. Recently, some flautists have decided to play on wooden flutes again, because the timbre mixes better with the other wooden instruments of the woodwind section of the symphony orchetsra.

The flute is a popular instrument, not only because of the slender, elegant shape, but also because of the beautiful, versatile sound. The flute can sound warm and soft as velvet, or high, loud and penetrating. Another member of the flute family is the alto flute. The alto flute is larger than the normal flute and therefore has a lower pitch. The grandfather of the flute family is the bass flute. This is the largest flute and sounds one octave (8 notes) lower than the normal flute. The flute mixes very well with other instruments; flutes also sound very well together in an ensemble. There is an extensive repertoire; many of the greatest composers have written works for flute.
Besides classical music, the flute is very well suited to other styles of music, such as jazz, pop, musical, folk music, and much more! The flute often figures in legends and fairy tales, like the Pied Piper: by playing on his flute, he lures the rats out of the city!
Children can begin flute lessons at the age of 6 or 7.

Piccolo
Another member of the flute family is the piccolo.It is the smallest of the family (piccolo means small in Italian) Therefore, it is also the highest, and the sound easily carries over an entire symphony orchestra.