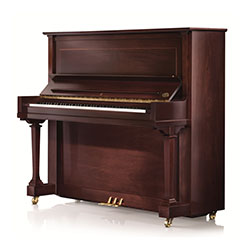 The piano is undoubtedly one of the most popular instruments of all times. The ancestor of the piano in the harpsichord. The harpsichord was extremely popular in the baroque era – Bach and Handel’s time. It was actually during Bach’s lifetime, around 1710, that Christofori developed the first piano. Bach, however, preferred the more refined sound of the harpsichord, whose strings are plucked, whereas the piano’s strings are tapped with hammers. Because of this, the piano produces a louder sound than the harpsichord. It also gives the piano another advantage over the harpsichord, namely the ability to play loudly or softly. Because of this exciting new possibility, the new instrument was dubbed (in Italian) the pianoforte – piano, which means soft, and forte which means loud. The pianoforte continued to evolve into the modern piano we know today. Eventually the name was shortened to piano.

The first pianos had a horizontal sound board, like the harpsichord, and grand pianos still do. The idea of the upright piano evolved in the 19th century. The original pianofortes, like the ones played by Haydn and Mozart, had a much lighter sound than modern pianos; the strings were thinner, the hammers lighter and the mechanism simpler. Innovations continued to both improve the tone and increase the volume. In a short time, the piano became so popular that, by 1780, it had pretty much eclipsed the harpsichord. This was the period in which Mozart composed his piano concertos; shortly after, Beethoven composed a monumental piano sonata especially for the “hamerklavier”.
One of the most important innovations was the mechanism which allows a note to be repeated very rapidly. The next generation of composers, including great pianists such as Schumann, Chopin and Liszt, wanted to get even more sound out of the instrument. The strings were made thicker, so the metal frame to which the strings are attached also had to be made stronger. By the end of the 19th century, the grand piano had more or less reached the size and shape it has today. At the same time, the smaller upright piano was becoming a favourite in people’s homes. To obtain a bigger, richer tone, all of the notes excepting the very lowest were produced by more than one string. To prevent the notes from reverberating for too long, a system of pedals with felt dampers was developed: the right-hand pedal pulls the felt dampers away, allowing the strings to resonate freely. The left-hand pedal works differently in a grand piano than in an upright piano. In the upright, the entire mechanism is broght closer to the strings so that the hammers hit the strings less hard and the resulting sound is softer. In a grand piano, het keys shift, so that instead of hitting three strings, they only hit two (for example), resulting in a softer sound and a different tone colour.
The piano is actually a combination of a stringed instrument and a percussion instrument. It can be very virtuosic, but also very lyrical and melodic. The classical repertoire for the piano is the largest of any instrument. It is also widely used in jazz, pop and other styles. Piano is an instrument which can be started at a very early age.