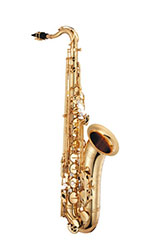 Who would have thought when, in 1842, Adolphe Sax invented the saxophone to enrich the sound of the military band, it would become such a popular instrument?

The big success story actually didn’t begin until the 1920’s, when the saxophone was suddenly all the rage in the United States. Eventually, it was officially forbidden to play the saxophone between 8 in the evening and 7 in the morning, to limit the disturbance of the peace.

Since then, the saxophone has assured it’s place, especially in jazz and pop music.

You can start to learn the saxophone as early as 9 or 10 years of age; it depends on how big your hands are. The best thing to do is try out an instrument together with a teacher. If you’re younger or smaller, it is possible to start playing on a bent soprano saxophone, which is quite a bit smaller and much lighter than an alto sax.