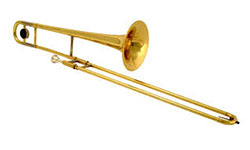 The trombone has existed for about 600 years, and evolved from the trumpet. At that time, trumpets had no valves, so that it was only possible to play a certain number of notes. When trumpets were fitted with a slide, it became possible to play many more notes. The name trombone comes from the Italian words “tromba”, which means trumpet, and “one” which means big. The English name for trombone is sackbut. In the 15th and 16th centuries, the trombone was especially popular in England. Many English kings employed trombone players in their orchestras. There were even ensembles of 16 trombones! The trombone also played an important role in church music, often being played together with organ or violin.

The trombone became part of the symphony orchestra around 1750. Most orchestra have 3 trombones.The sound of the trombone is very lyrical; it can express deep emotions. Three trombones playing chords softly is also a beautiful sound. But mostly, the trombone is known for its huge volume.

Many composers use trombones when they want the orchestra to sound its very loudest. About 150 years ago in the United States, there was a conductor who was so fed up with trombone players who always played too loudly, that he had trombones specially made with the bell facing backwards. The trombone is also important in jazz music. Jazz trombone players use different mutes to make all kinds of different timbres and effects.
More informwww.trombones.nl
www.muziekindex.nl/home-trompet-en-trombone.html information about the trombone on the internet.