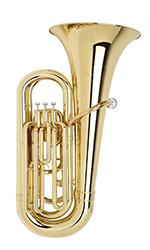 The largest and lowest instrument of the brass family is the tuba. With its large, wide bell and big mouthpiece, the tuba sounds warm and dark. The tuba fulfills the same role in the brass section as the double bass in the string section. Contrary to popular belief, the tuba is not just an oompapa instrument. The instrument has a range of more than 4 octaves. It is also a very flexible instrument, capable of playing fast, virtuoso passages. The tuba can play very softly or very loudly. Tuba’s exist in different shapes and forms. Some have2 valves, others have 3, 4, 5 or even 6.A smaller member of the tuba family is the tenor tuba, or euphonium. The euphonium plays an important role in bands – the same role the cello has in a symphony orchetsra. There are even euphoniums with two bells. For playing in marching bands, a tuba was developed which winds around the body of the tuba player. This is called a Sousaphone, named after the bandleader and composer John Phillip Sousa.