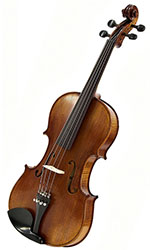 The viola is a string instrument, between the violin and the cello in both size and pitch. The viola also has four strings, which are tuned to the notes A, D, G and C. The C string, which is the lowest, allows the viola to play lower pitches than the violin. In ensemble music, the viola plays one of the middle voices, but it is also played as a solo instrument. The viola has a lovely rich, dark tone, but it can also be brilliant in the higher registers. In older music, viola parts were often not that interesting. Because of this, it was generally thought that a violist did not need to play as well as a violinist. But more and more, composers are recognizing the solo-qualities of the viola, and the repertoire is expanding rapidly, and requires as much skill as the violin. Many violists began by playing the violin, but a violist who began directly on the viola is called a “Edelbratchist” (“bratsche” is the German word for violist, and “edel” means noble). Because the viola is less known than the violin or cello, violists are more scarce – certainly in youth, student en amateur orchestras. The viola is the perfect instrument for someone who enjoys the rich, dark sound and who likes to play with others in chamber music ensembles and orchestras. Though the viola is larger than the violin, small instruments (3/4, ½ and ¼ size) are available, so that children can start at an early age.