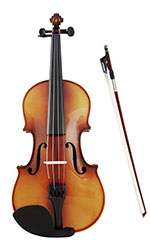 The violin is a stringed instrument which is played by pulling a bow across the strings. A violin has four strings, tuned to the notes G, D, A and E. The bow is a long stick of tropical hardwood, strung with hairs from a horse’s tail.
What is a violin made of?
Violins are made out of many types of wood. The top is made of epicea (a special type of pine), the back and ribs (sides) are made os maple, and the fingerboard is made of ebony.
The four pegs are used to tune the violin. The curled part above the pegs is called the scroll. The two f-holes in the top of the instrument are not, as many people think, to “let the sound out”, but to divide the wooden sounding board into many different lengths, so that different frequwncies will be amplified.

How does a violin work?
When the bow is drawn across the strings they vibrate. These vibrations are transmitted through the bridge (the piece of wood between the f-holes on which the strings rest) to the top. Inside the violin, between the top and the back, is a small stick of wood called the sound post. The sound post, in turn, transmits the vibrations from the top of the violin to the back. The whole violin vibrates, which causes the air around it to vibrate – and that is the violin makes its sound; sound is vibrations in the air.

A bit of history…
The violin First appeared in the north of Italy between 1520 and 1550. The first pictures of a violin which resembles our modern violin is a painting by Guardenzio Ferrari (1480-1546), “The madonna and the orange tree”, which hangs in the church of San Cristoforo in Vercelli (by Milaan). This violin has only three strings. Later pictures (1550) show four-stringed instruments, which almost resemble the violins we use today. The violin evolved in the 16th century from other instruments such as the ribee (the tuning in fifths) and the “lira da braccio” (the shape).

The first violins were made by lute-makers. A lute is a plucked stringed instrument, which is played like a guitar, but lute-makers then made all stringed instruments – that is why violin makers are also called luthiers. It was long believed that Gaspar Tieffenbriicker (1514-1571), originally from Bavaria but working in Lyon, was the first violin maker, but this is not certain. Three-stringed instruments from 1542 and 1546 have been attributed to Andrea Amati. Some of the most beautiful violin were made in Cremona, Italy, by famous makers like Amati (1535-1610), Stradivarius (1644-1737) and Guamerius (1626-1898). They were the patriarchs of large violin-making families. Some violin makers specialized in making bows and became known as bow makers: Pécate, Tourte and Dodd are three of the most famous.

Who composed Music for the violin?
Among the important composers of violin music in the 17th and 18th centuries are the violinists Corelli in Rome, Vivaldi in Venice and Tartini in Padua. Johann Sebastian Bach (1685-1750, Germany) wrote the Six Sonatas and Partitas for unaccompanied violin (which include the famous Chacone). Leopold Mozart (1719 – 1787), the father of Wolfgang Amadeus Mozart, was a violinist who also wrote pedagogic works for violin. Violin technique developed throughout the 17th and 18th centuries, reaching a peak with the violinist-composer Nicolo Paganini (1782-1840, Genoa). He wrote virtuoso pieces for the violin which are still considered to be some of the most difficult works in the violin repertoire today. Ever since Paganini, violinists have strived to equal his virtuosity, which raised the general level of technique. Almost all the great composers have written music for the violin: The concertos of Beethoven, Brahms, Mendelssohn, Tchaikowsky and Sibelius, to name a few, remain standards in the repertoire. Concertos by later composers, like Shostakovitch, Berg and Barber have taken their places alongside the old favourites, and present-day composers continue to add te the great violin repertoire.

Playing together…
With the violin, you can play in all sorts of ensembles: Duos, together with another violin, piano, cello or guitar; chamber Music ensembles like a piano trio (violin, cello and piano), string trio (violin, viola and cello) or string quartet (two violins, viola and cell), to name a few. In a symphony orchestra there are up to 36 violins, whereas there are only two to four of each wind instrument. This means that, as a violinist, you have much more opportunity to play in an orchestra, from youth and student orchestras to amateur and professional ones. You can also play different types of music on the violin, like jazz, bluegrass or folk music. Many pop artists play the violin – Vanessa Mae, the string quartet “Bond” and the Music and dance Group “Barrage” play Music somewhere between classical and pop, on electric violins.