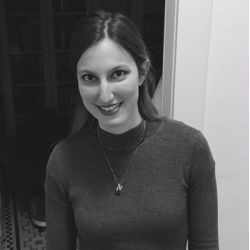 Stefania Pigozzo, born in Pordenone, Italy in 1992, began her music education as a child with Professor Lucia Grizzo. She continued her studies with the same Professor at the Scuola di Musica Pietro Edo in her hometown white also attending advanced classes with Professor Marian Mika. She graduated cum laude at the age of 16 at Conservatorio Polini in Padova. She was subsequently was admitted to the ‘Biennio a indirizzo Interpretativo” programme at Conservatorio Monteverdi in Bolzano among the students of Professor Davide Cabassi graduating with honours in 2014. Stefania also holds a MA in Music Pegadogy from Conservatorio del la Svizzera (Lugano, Switzerland), where she studied with Professor Sandro D’Onofrio. In September 2016, she was admitted to Koninklijk Conservatorium in Den Haag., where she is currently studying with Professor Ellen Corver.

Stefania made her orchestral debut at 13 years of age playing Mozart’s H414 Concerto conducted by Maestro Nicoletta Fenati & has since has given regular recitals including Festivals, International Competitions and causes such as UNICEF.  Stefania has taken part in numerous Master Classes with many prestigious pianists including Aldo Ciccolini, Bruno Canino, Paolo Bordoni, Benedetto Lupo, Riccardo Risatiti, Giorgio Lovato, Igor Tcetuev, Tatiana Larionova, and is happy to share her insights and knowledge with both young & adult pupils of all levels.