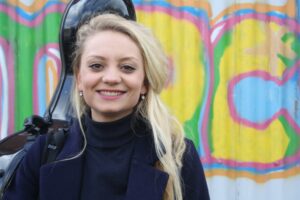 Eva van Schaik (1994) received her first cello lessons from her mother, Alexandra Vierkant, at the age of four. In 2012, she was accepted for the preparatory course of the Royal Conservatory in The Hague with Lucia Swarts and a year later for the Bachelor’s program. In June 2017, she graduated from the Royal Conservatory with a Bachelor’s in Classical Cello. She has recently completed her Master’s in Classical Cello with Jeroen den Herder at the Codarts in Rotterdam.

From a very young age, Eva has played in various (chamber music) ensembles, including the Haydn Youth String Orchestra in Groningen. She was leader of the cello group of this orchestra for two years. With the HJSO, she has given concerts in Prague, Berlin, Barcelona, ​​Florence, culminating in the Musikverein in Vienna. In addition, Eva has played in various projects of the National Youth Orchestra. Eva has followed master classes with Dmitri Ferschtman, Harro Ruijsenaars, Timora Rossler and Larissa Groeneveld, among others.

In addition to playing the cello, teaching is one of Eva’s great passions. She gives private lessons and has taught at the Young Talent department of the Royal Conservatory of The Hague, among others. She also works with the orchestra project “The Residents” in The Hagueand teaches in Gouda at the music school Cultuurhuis Garenspinnerij. She teaches all ages and levels, including very young children. At the Music Academy she will mainly teach children aged 4 – 7.

Lessons are given in Dutch, but may also be in English.