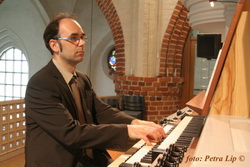 From an early age, Jeroen de Haan (1968) has had a great interest in the organ. In his youth he received his first organ lessons. After following the MTS school for electronics, he started working in business. However, his fascination for the organ and organ playing continued to increase. After studying at the Schumann Akademie for several years in the evenings, in 2003 he focused full-time on his studies and activities in (church) music. He then went to the Rotterdam School of Music and Dance (formerly the Rotterdam Conservatory). There he studied organ with Aart Bergwerff, and church music with Aart Bergwerff, Hans van Gelder and Arie Hoek. He graduated there in 2005.

Jeroen de Haan has been cantor organist of the Evangelical Lutheran church in Woerden since 1999 and is therefore the regular player of the youngest, still existing, Bätz organ from 1846.