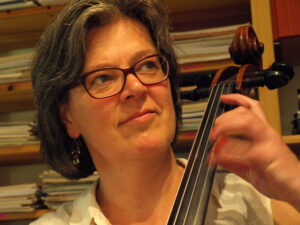 The Voice of a Cello
What the cello sound is reminiscent of
the cellist Widlund told me there is something in this instrument – a voice
a very old voice you are looking for
when you play and that you recognize
if you find it
maybe that’s why I have to think
of the oldest sounds I know, such as
humming, singing, groaning, crying
and also of the colors of a forest in autumn
as if you hear the homesickness of the cello
for its origins

“I want to hear your voice!” one of my teachers at the conservatory said regularly when I tried too hard to play exactly as he intended. This sentence has become my guideline, both in teaching and making music. I will play with my voice on stage, but in the classroom I would love to search for your unique cello voice with you!

I have been playing cello since I was twelve. At the conservatory, I had lessons from Godfried Hoogeveen and Dmitri Ferschtman. During my studies, I followed several international master classes, played in international youth orchestras and already started giving cello lessons. The combination of teaching and performing is still very inspiring for me.

After the conservatory, I trained as a teacher of General Musical Education, built up a cello teaching practice and played as a substitute in various orchestras, including the Netherlands Philharmonic Orchestra, the Royal Concertgebouw Orchestra, the Ballet Orchestra, Amsterdam Sinfonietta and the Residentie Bach Orchestra.

When I had children myself, playing in large orchestras slowed down a bit and I returned to my two great pre-conservatory loves: chamber music and baroque music. I took lessons in baroque cello and continuo playing and founded my own chamber music group, Camerata Delft, with which I play and organize many concerts. I also play chamber music and early music in various other ensembles. Since 2015, I also study viola da gamba with Ralph Rousseau Meulenbroeks.

Being active in music by learning to play an instrument is one of the most beneficial and rewarding activities I know of. Especially if you can share it with others by playing together. I want this for everyone.
So make your voice heard and sign up for cello lessons!