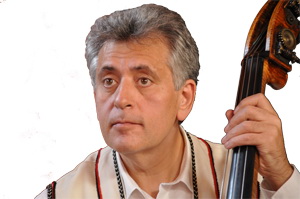 Mihai Scarlat is of Romanian descent and grew up in Rîmnicu Sarat (The Salty River). His father, trumpet player and conductor of the local brass band, gave him his first music lessons. Then he followed violin lessons with his uncle. When Mihai was 12 years old, he switched to the double bass and was admitted to the George Enescu Music Lyceum in Bucharest. After graduating with honors, he was accepted into the largest folk music ensemble in Bucharest – Ciocirlia in 1975.

In 1979 he joined the ensemble of Benone Damian, with whom he has made many tours at home and abroad. In 1986 he became a regular bass player with the Andrei Serban ensemble. During a music festival in Scheveningen, he and some Romanian colleagues decided to stay in the Netherlands.

He subsequently obtained his diploma Teaching and Performing Musician at the conservatories of Hilversum, Utrecht and Amsterdam with Peter Jansen and Peter Stotijn. Since 1997, he has been bassist with the Netherlands Ballet Orchestra, the current Holland Symfonia.