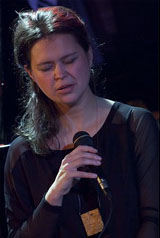 Born in Poland, based in the Netherlands since 1995. Graduated from the Royal Conservatory in The Hague in 1999 and worked as a singing teacher since 2006.
Also worked at the Koorenhuis from 2002 to 2013 as a world music and jazz singing teacher.
With her own ensemble, Natasza Kurek Group, she has released a CD “Incantation” with her own compositions and poems. Performed at the North Sea Jazz Festival, Crossing Border Festival and Rurek Jazz Festival and recorded for Polish National Radio and Television, Iceland Radio Broadcasting and VPRO (with Binary Orchid).

Her stage experience can be found in her teaching practice, which is mainly focused on jazz and improvisation.

In the lessons, a lot of attention is paid to in-depth knowledge of broad singing techniques, namely EVTS, but also text experience, interpretation and presentation. Natasza calls herself a “song anthropologist” and enjoys working with motivated students who like different music styles such as world music, jazz, musical, soul and pop.

She gives individual or group lessons to adults, and motivated teenagers from 16 years, in Dutch, English or Polish.