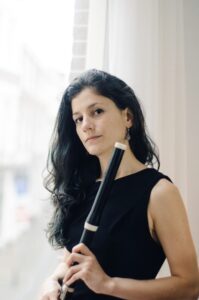 She earned her Bachelor and Masters Diplomas in early flutes at the Royal Conservatoire The Hague. Her research on the characters of the flute and the presence of flutes in renaissance iconography has brought her to present lectures for the Royal Music Association in London, the National University for the Arts of Argentina, the Janáček Academy of Music and Performing Arts, and others.

She joined the Royal Conservatoire in The Hague’s staff in 2017, teaching since then courses and clinics about performance, methodology and didactics of early flutes in education, and historical development of the traverso and flute. She has been teacher of traverso for the flute class of the Fontys Hogeschool voor de Kunsten in Tilburg.