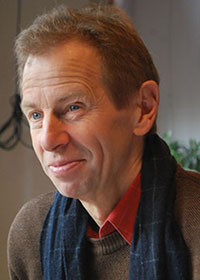 After study at King’s College, Cambridge, and the Guildhall School in London, Richard sang a variety of roles at ENO, Glyndebourne, Opera North, and the Monnaie in Brussels. He sang in Jonathan Miller’s staging of the St Matthew Passion, for TV and CD.

He was a founder-member and frequent performer in Graham Johnson’s group The Songmakers’ Almanac. He also specialises in contemporary music, with notable performances for Almeida Opera, and at the Concertgebouw in Amsterdam.

Appearances in Ireland have included concerts with the New Irish Chamber Orchestra, and premieres of operas by Kevin O’Connell (for OTC) and Gerald Barry (at the Gate theatre).
He now teaches in London – at the Guildhall and the Royal Academy of Music – and leads the Singers’ Workshop at Morley College. He has given Master Classes in France and Australia, and served on the jury of the Kathleen Ferrier competition