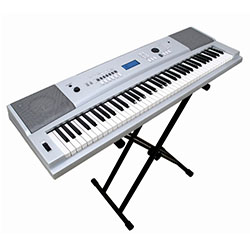 The organ manufacturer Hammond introduced the first keyboard around 1980. The “electric” organs had a keyboard which was a copy of the original organ keyboard and a rhythm box. Because these instruments were very large, a smaller version was developed, and thus, the keyboard was born. After 1980, the evolution continued, resulting in the instruments we know today which can reproduce the sound of the piano, stringed instruments, guitar, wind instruments, percussion, etc. The different sounds have become so realistic that they are increasingly more difficult to distinguish from the real, acoustic instruments.
The keyboard also has an accompaniment panel that is operated through chords. This makes it possible to generate an automated accompaniment in various styles and genres. Naast het bovengenoemde ontwikkelde men ook een speciale plek om een bepaalde klank te kunnen bewerken en omvormen. There is also a system with which sounds can be manipulated (an idea which stems from the much earlier synthesizer).
Keyboards can also be connected, with midi-cables, to a computer. This makes it possible to record music which can then be modified using various types of music software.
Some well known manufactures of keyboards are Casio, Korg, Roland and Yamaha.
Many styles of music can be played on the keyboard: light classical, pop-rock and experimental. A keyboard is much smaller than an electric (digital) piano and therefore has less keys; this means that not all of the notes found in sheet music (the highest and the lowest) can be played on a keyboard.

Children can start keyboard lessons as early as 6 years of age; of course starting at a later age is also possible. It is essential to have an instrument at home to be able to practise what is learned at the lessons. Instruments can be purchased through marktplaats.nl, where many instruments are offered for sale at a good price. It is, however, important that the instrument be tried out (by the teacher) prior to purchase.