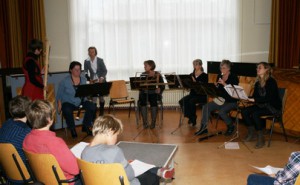 The recorder, called the “block-flute”in other languages, owes its name to the wooden block found in the mouthpiece. You can see this block in every wooden recorder; it is made of a different type of wood than the rest of the instrument. The combination of the shape of the block and of the recorder itself determine the timbre of the instrument. Recorder has been played since the middle ages. The oldest recorder still in existence was found in a canal in Dordrecht and was made in the 14th century.
From the 16th to the 18th century, playing recorder was very popular and the instrument underwent further development. Recorders were made in many sizes, which could be played together. The biggest recorder is more than 2.5 metres long!
A good recorder ensemble has a beautiful, warm sound, comparable to the sound of a wooden positive organ.

The recorder ensemble plays music from different periods, on recorders of different sizes. The accent is on renaissance and baroque music, but more recent repertoire is also offered. We work on ensemble, articulation, ensemble tone and intonation, and interpretation. Sonja loves to tell about the repertoire, and has extensive knowledge of the origins and historical background of music from these periods.