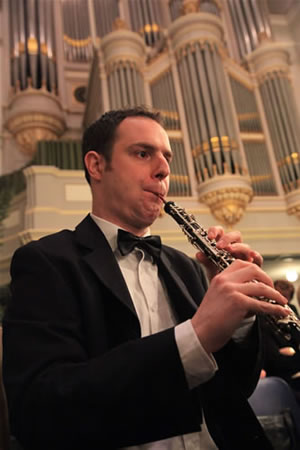 Benno Simonis obtained his Bachelor’s degree for oboe in 2005 at the Royal Conservatory in The Hague, where he studied with Ali Groen. He continued his studies with Ernest Rombout in the Master’s program at the Utrecht School of the Arts, where he obtained his Master’s degree in 2007.

During his studies he played in the National Youth Orchestra (NJO) and also in various student orchestras, including the Netherlands Student Orchestra (NSO) and Krashna Musika. He is a regular substitute for Sinfonia Rotterdam, RBO Sinfonia, The Dordts Chamber Orchestra and the Amsterdam Symphony Orchestra (ASO).

Benno is also active in the field of chamber music. For example, Benno was a member of the Reed Quintet Pentatics for 5 years, with which he gave concerts nationally and internationally. He has had chamber music coaching from Raaf Hekkema, Brian Pollard, Herman Jeurissen and Pierre Woudenberg, among others.

Benno currently belongs to the permanent core of Chamber Orchestra Accompagnato (formerly Continuo Rotterdam) and he is the oboist of wind quintet Hi-Five.