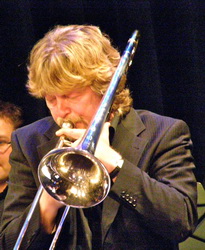 Gert studied both classical and jazz trombone at the Royal Conservatory of The Hague with Art Moore and Bart van Lier. He first obtained a teaching qualification (B) for trombone and later a certification to teach on other low brass instruments (bass tuba, tenor tuba, euphonium, etc.).

He has extensive experience as an orchestra leader and conductor of various amateur orchestras and big bands.